While the main religion in the region is not Christian, Christmas is still celebrated to some extent in most places in South East Asia.  With all the tourists you won’t have much trouble finding a Christmas dinner or celebration of some kind; just in a far more relaxed atmosphere without the materialistic gift-giving.

Cambodia, Laos, Malaysia, Thailand & Vietnam all have the major religions plus many others with the freedom to practice in all. In many places such as Pai as one of the best examples, you will find many different religions all living in harmony side by side.

Malaysia is officially a Muslim country while Vietnam is officially an Atheist state although many citizens practice various religions. The main ones being Buddhism,  Taoism & Confucianism.

These are not really religions as such as there is no god to worship.  More a philosophy than a religion. There is often debate on the topic as to whether they are actually religions or not though.

Thai’s rarely need an excuse for a celebration or a party.   Three new year holidays alone attest to that!

The western new year on January the 1st sees a three day holiday.  Then soon after the Chinese new year.

Then it’s the real Thai new year on the Buddhist Calendar in mid-April known as Songkran. Three days where Thai’s return home to be with families and time to celebrate with lots of drinking and the annual water war. Be prepared to get very wet unless you stay in your hotel room for 3 days.

Better to join in the fun.

Christmas though is a far more relaxed event. No rowdy crowds as per new year.

It is the highest part of the tourist high season though so expect big crowds in tourist areas and prices to rise substantially for most tourist accommodation at least. Flights also.

Many accommodation providers, especially the better quality ones put on lavish but expensive Christmas Eve dinners and Christmas day Lunch. Some of these are compulsory for your booking.

Santa often shows up although often not as large as usual.

So Thailand is as good as anywhere for a Christmas in South East Asia.

You will hear Frosty and Jingle Bells (Jinjer Ben as the local sing-along), and all the other favourites in the big department stores from late November. Many also with a giant glittering Christmas Tree in front.

Thai’s, in particular, will use any reason to have a party.   Christmas in Thailand? Absolutely, if you are happy to pay more and don’t mind the crowds.  Book early also.

Yes, even in Muslim majority Malaysia you will know it is Christmas with the malls and others playing the usual songs and carols.

One particularly good place to enjoy it is in the Cameron Highlands town of Tanah Rata.

Tanah Rata has a sizable Christian population and a large Catholic Church.

A turkey dinner will be easy to find at some stage in this cooler hill station town.

Some of the best South Indian cuisine either side will only make this delightful destination even more memorable. One of the even better places to spend Christmas in South East Asia.

Again the downside is higher prices and large tourist crowds.

But possibly the best place in all South East Asia to spend Christmas overall.

These three countries would also be enjoyable places to spend Christmas in South East Asia.

Laos and Cambodia, in particular, would be an even more laid back experience.

Again because of the cooler weather during the high season prices will go up and even more so in Vietnam.  It may even be quite cold in North Vietnam.

In general, it is not the best time of year to visit South East Asia apart from the cooler dry weather.   Escaping the European winter may be a good enough reason though.

Unfortunately, everybody else will be doing the same, meaning big tourist crowds and high season prices.

If these don’t worry you then celebrating Christmas in South East Aisa is highly recommended for another way to experience it.  Escaping the silly season back home will appeal to many also.

Escaping the summer heat from down under and the big freeze from above is the main reason for most though.

Last and best advice is to get off the beaten track to enjoy it in an even more relaxed way.   Avoid the islands if you want peace and quiet and lower prices.

At Baktrax we can put a private itinerary together for you to enjoy Christmas in your destination of choice. The Best Places to Spend Christmas in Thailand 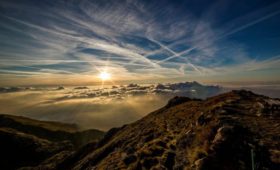