In simple terms;  By far the sleepiest capital city in Asia & possibly the world.   Chill out & drink Beerlao.  Here is our official guide to Vientiane, Laos.

From Lonely Planet; The history of Vientiane began when it was first settled in the 9th century and became permanent in the 10th century.  It was originally settled because of the surrounding fertile plains.

Vientiane has been on a roller-coaster history ride ever since.  At times being ruled by the Vietnamese, Siamese, Burmese and the colonial French.

Its height of glory was when King Setthathirath moved the Lan Xang capital from Luang Prabang in the 16th century. Many of the cities Wats were built during this period and it became a major centre for Buddhist learning.

In 1805 the Siamese installed Chao Anou, a Lao prince who had been educated in Bangkok. Chao Anou gave the city a makeover which included Wat Si Saket, which was built between 1819 and 1824.

Unfortunately, his attempts to assert Lao independence over the Siamese resulted in the most violent and destructive episode in Vientiane’s history. In 1828 the Siamese defeated Chao Anous armies and wasted no time in razing the city and carting off much of the population. Wat Si Saket, the base for the invaders, was the only major building to survive, and the city was abandoned.

In 1867 the first French arrived but it wasn’t until late in the century, after Vientiane had been made capital of the French protectorate, that serious construction began.

A  grid plan was laid out for the city and a sprinkling of colonial-style houses and administrative buildings emerged.  Vientiane was always lower in the French order of Indochinese ambitions, as the lesser building program tells.

In 1928 the ‘city’ was home to only 9000 inhabitants – many of them Vietnamese administrators brought in by the French. It wasn’t until the end of WWII that Vientiane’s population began to grow with any significance. It was a growth fed primarily by Cold War dollars, with first French and later American advisors arriving in a variety of forms.

After a couple of coups in the 1960s, Vientiane had by the early ’70s become a city where almost anything went. The few bars were patronised by an almost surreal mix of oddballs and foreign correspondents, and the women who served them.

Not surprisingly, things changed with the arrival of the Pathet Lao (PL) in 1975. Nightclubs filled with spies were the first to go and Vientiane settled into a slumber punctuated by occasional unenthusiastic concessions to communism, including low-level collectivisation and an initial crackdown on Buddhism. These days the most noticeable leftovers from the period are some less-than-inspired Soviet-style buildings.

Things picked up in the 1990s and in recent years the history of Vientiane has seen a relative explosion of traffic, much of it financed by China, the country that will likely have the most significant influence on Vientiane’s future.

Today the population of Vientiane is around 560,000.

Tourists have been arriving since the mid-1990s and continue to grow with its uniqueness being one of the main attractions. Safe, friendly and as laid back as anywhere on earth.

Main Attractions / What it’s famous for

The main tourist attraction in Vientiane is Wat That Luang. The current temple was built in 1566 but its foundation dates back to the 3rd century. It is 44 metres high with the pinnacle covered in real gold.

There are numerous other temples and historical buildings and once you have strolled around many of these you will realise why it is also famous for its tranquil laid back way of life in comparison to all of its neighbour’s capitals.

Things to do in/around Vientiane

Like all major cities, there are numerous things to do in and around Vientiane. While most of the attractions are within walking distance and taxis are dirt cheap, maybe hire a bicycle and ride around to all the attractions with far less traffic than any other big city in the region.

Walk up the Arc De Triomphe look-alike of Patuxai for city views.

For shopping head to the Talat Sao morning market or the Mekong riverside Evening market.

26 km outside the city is the riverside Buddha Park which houses a collection of more than 200 bizarre  Buddhist & Hindu inspired concrete statues. It was built in 1958 by Luang Phu Bounleua Soulilat who fled in 1975 when the communists came to power.

Finally, like everywhere in Laos, once the sun goes down, enjoying a cold Beerlao is the main activity to finish the day.

Eating out in Vientiane has a surprisingly great range of choices these days. From a local bowl of noodle soup to high-end international restaurants

For spicy food, Laos Larb is the local must-try dish. Pizza also if you must.

Possibly the best city in the region for the French legacy of baguettes for breakfast.

Beerlao is almost legendary among Laos travellers and a real source of local pride, being one of the few things manufactured in-country.  And for not much than $1.00 for a big bottle, all beer drinkers will be more than content.

Vientiane is suitable for travel all year other than during the haze season between late February & mid-April.  The best weather is the cooler time between November & February. Alas, high season prices go up as the weather cools down.

Many actually prefer the rainy season between June & September as the air is clean with fewer tourists and lower prices. Short heavy downpours very rarely last more than 30 minutes. So another coffee or Beerlao and off you go again.

So Vientiane would be the softest Asian big city landing for any first time visitor to the region. Laidback & extremely safe among friendly locals.

If hectic Bangkok, Kuala Lumpur, Phnom Penh and its total opposite of Hanoi seem daunting then Vientiane is the way to go.  Like all of Laos; Vientiane really is different than all other capitals in its relative serenity and charm.

Experience it all on this 15 day relaxed Laos tour. 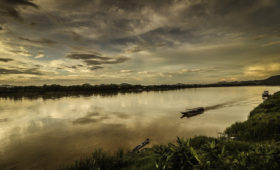 Everything you need to know about the Mekong River

Reasons to Travel in Laos & Cambodia 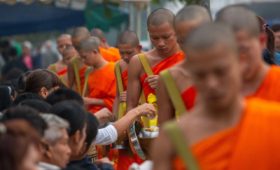 8 Top Things To Do In Luang Prabang