Baktrax consider that most of our destinations are chilled out and laid back to some extent. Even a welcome drink in the Gecko bar in Bangkok is a relaxing start among the  nearby chaos .   Just two of the more famous places are Hoi An in vietnam and Luang Prabang in laos. it would be hard to find two more enjoyable destinations in the region.  BUT! they do have lots of tourists at times . Cruising on Halong Bay is also chilled out but only for a short albeit totally relaxing time.  When on holidays with baktrax we expect everyone to be in relaxed mode anyhow.

But for those wanting the ultimate laid back destinations the following are as good as it gets. They all feel as safe as anywhere on earth also and probably are.

NORTH THAILAND:  Both Pai and Sukothai see many tourists but low season you would hardly see any in Sukothai and Pai slows to a fairly laid back destination also. Avoid Pai in high season though as it is total chaos at times since domestic tourism found it.

SOUTH THAILAND: Prachuap Khiri Khan gets the nod with beautiful scenery and laid back beaches away from the hordes.

MALAYSIA: Tanah Rata in the Cameron Highlands is a busy tourist destination but still retains the chill out affect.   Then there are the lesser known Taiping and Kualar Kangsar  where you may not see another single tourist. Stroll around in a totally relaxed frame of mind in both.

CAMBODIA: Even though Battambang is Cambodia’s second biggest city is it about as chilled out as anywhere. A few tourists but with nothing like the chaos or in your face touts of the capital Phnom Penh. And in saying that an evening beer on Sisowath Quay is about as good as it gets also. But Battambang has that amazing feel good place about it all the time whichever way you stroll.

Ban Lung is the new place on the Baktrax also these days with this small capital of Ratanakhiri province again as laid back as it gets and perfect to explore on foot. Get there fast because once word gets out that may end.

LAOS:  PAKSE;  The entire country is the most laid back in all S.E. Asia but there is no better place than Pakse in the south to stroll around and forget all your worries.

LUANG PRABANG; with all it’s tourist arrivals it does a good job of retaining it’s laid back charm also. Again, more so in low season. And with all it’s attractions it doesn’t get much better possibly any where on the planet. There really is something special about a 5.00 beerlao   beside the Mekong in Luang Prabang before exploring the night walking st market which is closed to traffic in the evening.

SAVANAKHET;  gets a very honorable mention also as you stroll around the French colonial buildings.

VIETNAM:  Vietnam is probably the least chilled out of the Baktrax countries. Millions of motor bikes in all directions being the reason for this. But you can still find chill out places among the hustle.

HOI AN:  Most visitors favorite place in the entire country it is the Vietnam equivalent of Luang Prabang, also being UNESCO world heritage listed. Many of the streets are closed to traffic so it is still a joy to explore.

NHA TRANG; While Nha Trang is  a big busy city it sits right beside a lovely stretch of beach and has all the feel of a seaside city. Calm and easy going especially once you step onto the sand.

Anybody wanting more time in these laid back destinations can plan their own itinerary for as long as you want. How often do you here returning travellers say “I wish we could have spent more time there”

If you want more time in any of these destinations than our regular tours baktrax can put something special together for you. 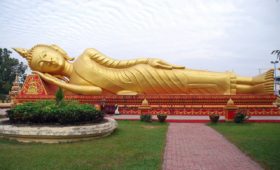 Never Judge a Book (or Food Court in Malaysia!) by its Cover