Malaysia, along with Thailand, is where it all began for Baktrax. And along with its northern neighbour it’s still our favourite albeit for different reasons than Thailand. 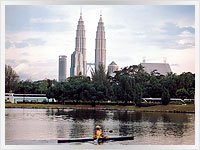 Malaysia covers 330,00 Sq Km with more than 50% of this on Borneo Island. The peninsula is tropical with a few cooling hill stations.

POP: The population is around 23 million with 85% living on the peninsula. Ethnic Malays make up 57%, Chinese 27%, Indian 8% and many other minorities the other 8%.

Malaysia has a democratically elected government and holds regular elections. Dr. Mohamad Mahathir ruled as P.M. for decades and while many disliked his autocratic style these years saw Malaysia gallop towards developed nation status. If things continue as is this status wont be far away.

Malaysia is first and foremost a Muslim country but with the large Chinese and Indian communities you won’t have to look hard to find a Hindu or Chinese temple, or even a Christian church for that matter.

Freedom of religion is guaranteed in Malaysia.

Kuala Lumpur is the capital. Known as K.L.

to all and can be described as a smaller version of Bangkok. Busy all the time but with the new public transport on elevated rails it’s far easier to get around. Like Bangkok also, lots to see and do.

Hot, hotter and humid all year round.

The rainfall is evenly spread year round on

Not as world renowned as some other places but who’d know the reason for that? It certainly doesn’t get any better than Malaysia when it comes to meal time. We don’t say it’s always the healthiest but if your only here for a short time then go for it. Three menus in one.

Just three of the must tries are an India roti breakfast, a bottomless banana leaf meal and an Ice Kachang for dessert.

If not as good as Thailand then it’s only a nose behind. There are fabulous shops and markets in K.L. and Penang in particular and you may find an electronics or camera bargain if you know what you’re looking for. Visit a dentist for a bargain filling or two.

Start with an empty bag and go home with maximum weight. Not a thing to worry about except the extra inches on your waistline! Malaysia is a very safe multi-cultural travel destination, and if you could only visit one Asian country, then with its three cultures in one, Malaysia must be high on the list.