After its recent history Vietnam is now seemingly following China and its economy is starting to boom and tourism is playing its part in this.

There are no longer travel restrictions and with good roads and transport now available the most scenic country in the region continues to increase its tourist arrivals all the time. 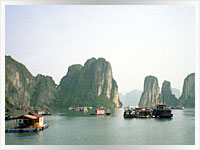 Vietnam is over 326,000 Sq Km in size. With 3,450 kilometers of coastline. All this is spectacular tropical greenery with a cooler mountainous north.

Vietnam has a population of almost 83 million people.

This means, unlike Laos with only 20 per sq km, it has a population density of 230 people per sq Km.

Like China and Laos it is also controlled by the Communist party.

The political capital is Hanoi in the north while Ho Chi Minh city (Saigon) is the economic hub of the south. Both are extremely big and busy cities.

Hanoi streets in particular are an endless sea of motorbikes.

Bicycle rickshaw is the best way to get to the numerous sights in both cities.

Hot and hotter for the most part but also with a humidity you’d steal for – steal an air conditioner that is!

The exceptions to this are the mountains in the north which occasionally even see snow in the winter months.

HOT: Not much at all.

A bowl of noodles or rice paper spring rolls are just

two of the starting points.

The currency is called the DONG. And it will take less than U.S.D 100.00 at a currency exchange

for you to be an instant millionaire. The U.S. dollar is

readily accepted in most daily transactions with the change usually given in Dong.

A shoppers’ paradise to help you spend your millions. From arts and crafts to a new suit and lots more besides.

With the humid weather packing lightly is very important.

The Vietnamese are as friendly as anywhere else in the region. Unfortunately some Europeans may say otherwise due to the persistent in-your-face tactics of some touts who  may try to sell you everything from a taxi ride to a pack of fags or tissues. None are in any way threatening and are extremely friendly and if you actually want what they are selling. Alas, some will not take no for an answer and will even follow you as you walk while asking you over and over again, “You want taxi?”

They can, and probably will, annoy you from time to time but please don’t lump the entire country into one pile because of a few over zealous touts. And most certainly to not lose your cool with them, it’s hot enough already. Vietnamese are lovely people. Full stop.