Small Group Tours of Malaysia
SEE ASIA IN A NUTSHELL | MALAY, INDIAN, CHINESE AND ETHNIC CULTURES
Tour Malaysia with Baktrax and meet the warm and friendly people of this wonderful country and cherish the warm memories you will take away. You will be captivated by Malaysia’s gorgeous landscape, its varied races and religions, and many wonderful attractions. Grab the chance to tour Malaysia with Baktrax, and see the wonderful culture which has existed since the 14th century.

Baktrax Tours to Malaysia
Let us show you the very best of Malaysia, and at the lowest all-inclusive prices you’ll find anywhere.

Meander In Malaysia Tour
Get a tour and an even more relaxing holiday at the same time. With three cultures in one there’s not many better places for a meander than Malaysia…. Continue reading →

Malaysia is a bubbling, bustling melting pot of races and religions where Malays, Indians, Chinese and many other ethnic groups live together in peace and harmony.

Multiculturalism has not only made Malaysia a gastronomical paradise, it has also made Malaysia home to lots of colourful festivals. It’s no wonder that Malaysians love celebrating and socialising. As a people, they are very laid back, warm and friendly. In fact if Laos has the best beer in the region and Yunnan the best noodle soup then Malaysia may have the nicest people. With such lovely people in all the Baktrax destinations that’s the biggest call we will make in regards to the best of, but forced to make a decision and Malaysia is the choice and would be up there with any country on earth also in regards to friendly people.

Geographically, Malaysia is as diverse as its culture and one of Malaysia’s key attractions is its extreme contrasts. Towering skyscrapers look down upon wooden houses built on stilts. Cool hideaways are found in the highlands that roll down to warm, sandy beaches and rich, humid mangroves.

For the perfect holiday full of pleasant surprises tour Malaysia with Baktrax.

Malaysia’s most recent history started with independence from the British in 1957 and with then Singapore to form the Malay Peninsula. In 1965 They split with Singapore to make what today is two countries. Since then Malaysia has continued to grow and hopes to reach developed nation status before 2020. So while it still has a way to go it is the most developed of all the Baktrax destinations. The same political party has been elected ever since independence but recently the gap between parties has gotten much smaller and any election soon may see a new government in control.
While the principal religion is Islam a more tolerant country in this regard would be hard to find as you will see Chinese and Hindu temples as well as Christian churches intermingled with some magnificent Muslim Mosques almost every step of the way.

HIGHLIGHTS: There are numerous highlights like in most countries but the highlight of highlights to begin with is just being there. Nowhere else does this feeling take on more significance than Malaysia. Think people and food and that’s enough in itsef to get repeat visitors. One elderly Australian couple we met had spent the last 35 Christmas’s in Malaysia, primarilly in K.L. And while there is far more to Malaysia than the capital we think that’s the best recommendation we have ever heard.
For individual highlights we will start in K.L. with Chinatown right beside your accommodation with Petaling street the main tourist shopping area. Not far away and easy to get to via the new sky train systems is the Petronas Towers, the Lake Gardens and Bird Park, Batu caves and the colonial style railway station. Within walking distance is the Central Market, numerous museums, mosques and shopping opportunities. A Malay, Chinese or Indian restaurant will never be far away either.
MELAKA is one of the most historical places in S.E. asia and with good reason.
Historical buildings and other attractions from its long rich history as a major trading post are still there today. Lots of museums and other things to discover as you meander the atmospheric old town. Different food choices again such as Nonya which originated in Melaka also.

The cooling Cameron Highlands is next up where blankets are needed at night most of the year. The rolling tea plantations landscape and cooler climate make walking one of the most popular pastimes in between meal times. Again lots of great restauants but South Indian cuisine is some of the best in the country in the main town of Tanah Rata with its large Indian population. Another one of those special places you will reluctantly have to leave too soon.

PENANG ISLAND is next up and for overall food we would probably pick it for the best food place in the best food country. It is not unknown for K.L. residents to drive all the way to Georgetown on the weekend just for the food. Georgetown has an atmosphere all of its own also. While nothing like the world heritage listed places of the other countries we think it would be our favorite place in all of the Baktrax region. Modern shopping malls stand alongside street vendors and historic buildings giving Georgetown a unique feel as you window shop. Penang Hill is the main actual tourist attraction where you can get good views of the island from the top.
KUALA KANGSAR and TAIPING are two lesser known but no less enjoyable towns you will visit also. Here you may not even see another touist. A fascinating look at traditional Malaysia.

LANGKAWI ISLAND just north of Penang is probably the best known of all the Malaysian islands and it lives up to its reputation of the fabulous resort island it is. Beach out or party are the usual island pastimes and Langkawi is no different. Just a bit more beautiful than many others.

PANGKOR ISLAND residents and fans may disagree though as Pangkor island may be lesser known but is no less beautiful. Stunning inland greenery and warm sandy beaches is how to think for both of them.
LUMUT is the place to get the boat to Pangkor and is another great place to experience pure Malaysia along the way also.

SHOPPING: Malaysia or maybe Thailand gets out vote for the best shopping in the region. It doesn’t get much better than k.L. or Penang whether it be big modern malls or local markets in tiny back streets. Electronics in particular can be great bargains if you are knowledgable in this area. Penang road in Georgetown and Petaling street in K.L. are probably the main tourist shopping areas in the country. like Thailand, Malasia has just about everything shoppers will want and more.

FOOD: While Chinese, Thai and Vietnamese food is far more famous Malaysia easily gets our vote for best food country in the region. Maybe some of the other countries have better single dishes but overall Malaysia easily wins. Malay, Indian and Chinese means the best of three worlds. We don’t always say it is the most healthy but for sheer mealtime enjoyment Malaysia has no rival. We will wet your appetite a little for now with just a few suggestions. Start the morning at least once with an array of Indian breads and sauces. Dosai, Roti, Vardai and Idly are all different types of bread dipped into a variety of dipping dahls and curries. Finish it all off with a final Roti covered in sweet milk. All washed down with tea or the local style of strong coffee. Next day have Dim Sum at a Chinese restaurant and the next try the local Malay fav of Nasi lemak. Time also to have baked beans on toast if you wish also or any other western breakfast. For lunch it can be an Indian buffet style restaurant with as many choices as you can imagine. Most agree this is up there with the best of the best meals. Eat your choices served on either a banana leaf or plate and use your fingers instead of a spoon to get the delicious tastes of curry and other sauces intertwined with your chicken, prawns or vegies. One Malay lunch worth a mention is Laksa which originated and is still the most famous in Penang but now comes in a number of regional varieties also.
For dinner the choice is usually a tough one. Another indian buffet perhaps or Tandoori chicken with garlic naan bread washed down with a mango lassi would be a great starting point. The usual Chinese fare will be easy to find also for the more health conscious. For dessert, Indian sweets are always on hand but on a hot Malaysian day it doesn’t get much better than an Ice Kachang. A weird collection of jellies, corn, beans and syrups are put on top of a large bowl of crushed ice. Sweet tooths will be in heaven. Restaurants, food courts and street vendors will always be nearby no matter what you decide on.
DRINKS: All drinks are available in Malaysia. Carlsberg and Tiger are the two major beers. The only downside is that while they will still be cheap compared to your home country they are the most expensive in the region. Apart from Langkawi Island that is where duty free status makes alcahol comparable to all the other Baktrax countries. Many imported beers not seen in most of Malaysia have been spotted on Langkawi also. For non alcaholic drinks there is a delicious array of local specialities also. Fruit lassi’s are available at most Indian restaurants. The Malay favorite is Cendol and a great way to cool down. Made from crushed ice, green squiggly pieces of jelly, coconut milk and palm sugar it is available from street vendors and in food courts for the most part,
The same places also sell Ice Kachang as a rule and Baktrax know the best two places for these in all of Malaysia. One in K.L. and one in Penang. Worth travelling half way around the world for these alone.
TO SUM UP MALAYSIA: For first time visitors to Asia we would steer you towards Malaysia as our number one choice when taking everything into account. The original Baktrax tour of Thailand and Malaysia would still be our one tour of choice today also, especially for first time Asia travellers.
AMAZING THAILAND and MAGNIFICENT MALAYSIA. Summed up to perfection.

Click on the following link to see what is on offer. 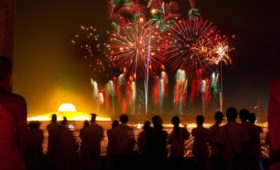