What a terrible time the wonderful Khmer people have had in the last 50 or more years. Now these lovely people are looking at tourism to help them put things right again, and with Angkor Wat they have a good start. 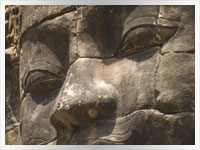 Cambodia covers just over 181,000 sq Km. most of which is covered by green jungle. It has a population of approximately 12 million of which the vast majority are Khmer.

After all the horror years Cambodia is now a constitutional monarchy with regular elections.

The vast majority of Khmer people are Buddhist.

The capital of Cambodia is Phnom Penh with a population around one million. Although things are improving all the time many parts of the city still have unpaved roads meaning it can get dusty or muddy at times, but with its old French architecture and wonderful riverside restaurants it has real charm too. With many great attractions boredom certainly won’t be a problem in Phnom Penh.

Hot and hotter is the way to think.

HOT: All year round.

Khmer food is similar to Thai but usually not as spicy and with nowhere near the same variety.

The currency is called RIEL.

Like Laos the Thai Baht and U.S. dollar are accepted in daily use but with the change usually given in Riel.

Similar to Laos with not as much choice as some of its neighbours. The fascinating markets, especially in the capital, will have something you want for certain.

Always pack light. The only complaint we have, and even that’s changing fast, are the poor road conditions in some places.